Home Men The Deliveroo Jacket: A Fad or The Latest ‘Anti-Fashion’ Statement 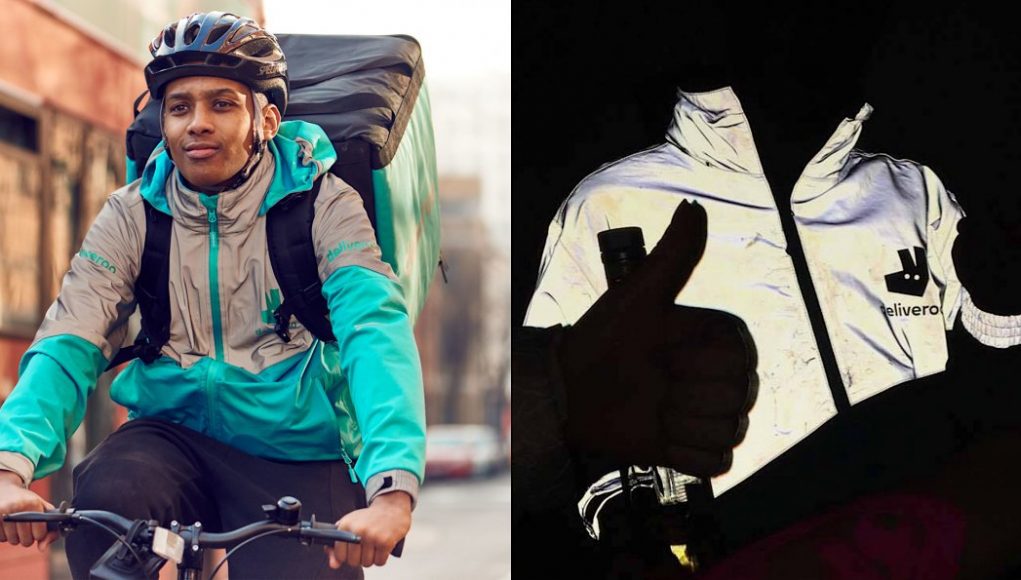 The Deliveroo jacket is the new fad in town. Unusual and visually striking uniforms worn by couriers for the London food delivery company, seem to have garnered attention of the common people. If you’ve been in London — or any other city Deliveroo operates in — you’ve probably seen the jackets on the backs of bike couriers in the past few months.

It’s gaining popularity is a proof that they’re being traded online on street wear forums. Deliveroo was founded in 2012, and is available in more than 80 cities in at least 12 countries, letting customers order takeaway meals from restaurants via a smartphone app. It unveiled the jackets as part of a bigger re-branding in September 2016. The jackets have been popping up on eBay ever since. They were found to make pretty nifty clubbing gear. Deliveroo jackets are made from highly-reflective nylon and feature a much more minimalist kangaroo logo than the original design. In Australia, drivers pay a refundable $220 for their jacket, shirt and delivery box. Country manager Levi Aron said he was flattered the jackets were “making the rounds with cult fashion fanatics”. The Deliveroo jacket is water resistant and unlike UberEats’ dark uniform, Deliveroo’s is highly distinctive. It has a trademark teal, with a reflective slanted upper. Bold and colorful in the day. By night, its upper gleams, brightly reflecting street lights and car headlamps. It serves as a utility wear and a fashion statement, killing two birds with one stone. And don’t forget, you’re now geared up for the monsoons as well.

But some people think otherwise; everyone to his taste. Believing it was first the DHL T-shirt. Then the IKEA bag. Now, the Deliveroo jacket has become the latest anti-fashion fashion trend. They might not like it as an obvious fashion choice because one can see the delivery boys wear it to the streets when delivering an order. Calling it “bourgeoisie” and unfashionable. It’s a combination that’s making waves among some alternative enthusiasts. Jake, 16, bought a jacket specifically for a party. “It was an animal themed house party with around 80 people. I wore it with some Supreme x playboy joggers to get laughs out of people but also for a partly ‘wavy’ look i guess,” he said. Others find the Deliveroo jacket’s colour appealing. Deliveroo seems bemused by the underground phenomenon. Simon Rohrbach, the head of design at the British startup, never thought this would happen when creating the new jackets. “It’s really humbling when you design something and it takes on meaning and value beyond what was originally intended,” he said. When designing the jacket, the company’s designers “took a fairly broad view of what was out there in terms of fashion, in terms of active wear”,with a focus on safety — hence the reflectivity. Deliveroo doesn’t intend to sell it’s reputation and has no plans on releasing them in stores officially right now.