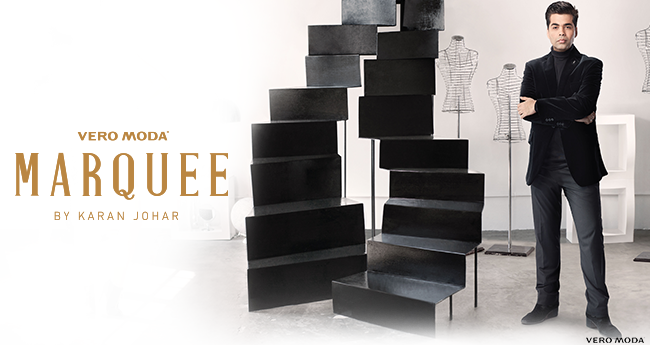 Karan Johar, A magician who has worked his wonders on many. He is the greatest story teller and star maker they say but this time he wants us to make a star of him. Karan Johan known for his all the epic stories has now turned himself into a designer for Vero Moda. He is known as a man with different hats: Producer, Actor, Host, Director, Writer, reality show judge and now a designer. I think he was not content enough with so much of talent and many hats so he has launched his own fashion label named Marquee with Vero Moda. Couture-like, high fashion and extremely audacious; these are the words which describe the collection.

He has often worked as a costume designer in his films. He said, “Through the years, I have used my films as an outlet to showcase my own sense of fashion which is luxurious and grand, yet functional at the same time.This is my first attempt to recreate my own distinct style by putting together a collection for a women’s fashion brand. The fact that I get to do it for a brand like Vero Moda makes it very exciting for me.”

Karan’s take on fashion is an interesting confluence of styles inspired by high-street trends and haute-couture. Just to give a glimpse of his collection, check out these pictures.

Let’s see how he keeps on evolving on this new route he picked and what he has to offer us every season. His collection really impressed us. It’s not an easy job to add sophistication and shimmer to one piece but he did it quite well.